In this post, we explain why we decided to work on a document storage service for Genius Scan and how we are approaching this engineering challenge. We think that the process is worthy of being shared and we also hope to get feedback from the community.

At The Grizzly Labs, we create helpful productivity apps. Our main product, Genius Scan, is a scanner for iOS and Android. It’s one of the most popular mobile apps, netting more than 15 million downloads since its debut in June 2010 — we never invested a cent in advertising — and constantly receiving great feedback.

Genius Scan is at the interface between the physical and the digital world: it enables you to snap a photo of a paper document, to correct any perspective distortion and to process it like a real scanner. With several scans, you can build multi-page PDF documents. Genius Scan is also particularly good at exporting them wherever you want (Box, Dropbox, Email, Evernote, Expensify, Google Drive, OneNote, OneDrive, FTP, WebDAV…)

Solving problems for our users

Genius Scan stores documents on the phone in the local app folder. Due to the app sandboxing, this folder is only accessible to Genius Scan and documents are not synced between different devices. They also never leave the phone unless you decide to export them (the exception being your automatic iOS backups). This has two advantages: simplicity of implementation and privacy.

Yet, after 4 years of answering support emails, we are clearly seeing patterns in user requests:
All this feedback keeps showing us the need for a document storage backend with synchronization logic.

One of the main challenges we face is that Genius Scan is already at large scale. Our millions of monthly active users scan about 250,000 new documents every day and have already generated more than 200 million scans. While we can find ways to stagger the launch, we can’t build a simple architecture that we would subsequently scale.


Our backend needs to meet the following requirements:

Synchronization is a typical problem and there are various alternatives:
After meeting with several top enterprise companies in San Francisco and in France, we decided to settle on implementing our own service due to the drawbacks of other solutions.

It’s crucial for us to identify trouble early. However, it’s easy to keep listing potential issues and corner cases and postpone the implementation, so we decided to take iterative steps towards our goal.

We are estimating the load that our millions of MAU would generate on our backend through a couple channels: metrics and surveys. They are a lot of options for metrics. As for surveys, we can query users by displaying an in-house banner ad in Genius Scan. We also ask people who contact us for support.

An important metric is how many documents a typical user (vs. a power user) has. We are also interested in estimating the peak rate of document scanning during a day.

On top of that, surveying users enables us to understand the financial sustainability: Are users ready to pay for such a service? Should we offer a limited trial to everyone? etc.

Using the Dropbox SDK in our Android app

Having such a prototype had several benefits: first, it gave us some self-confidence regarding the feasibility of this project. Second, it let us play with something concrete in order to think about the UX of the client apps; and finally, this was a first step in identifying potential issues on Android and in general (what are the typical synchronization conflicts, what behavior would we expect as users).

Our next step was to develop our own client-server solution. This time, we focused on the iOS app. We developed a straightforward backend using Sinatra. We covered this implementation with extensive specs in iOS and Ruby for the server. 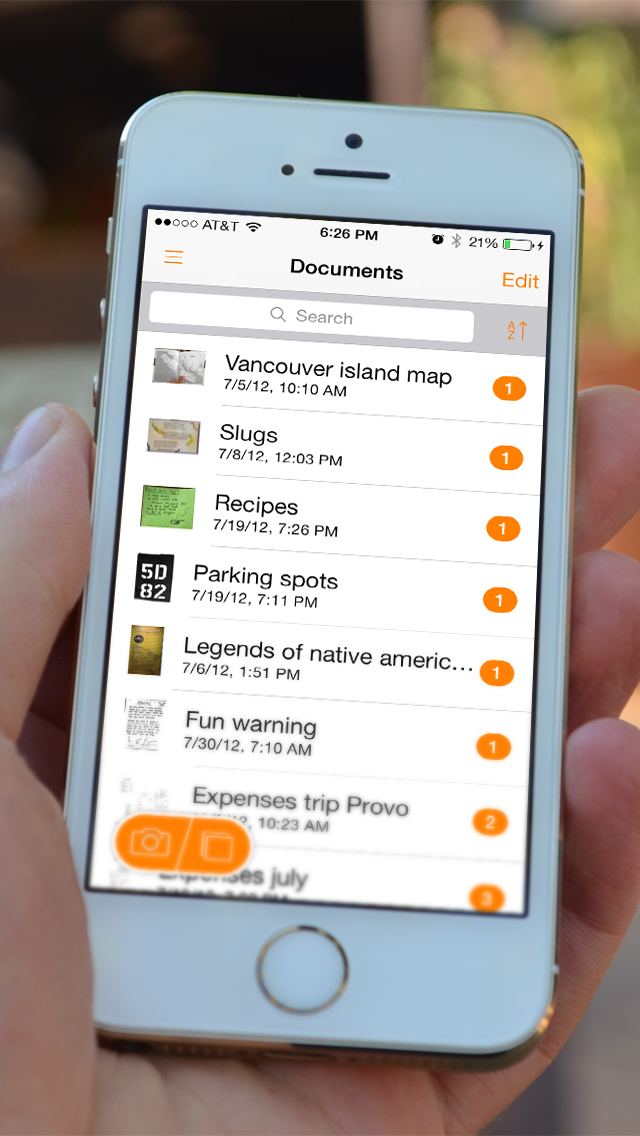 Our client implementation fits nicely with the existing Core Data code Genius Scan relies on. It’s also surprisingly not intrusive: all the synchronization happens in a different managed object context and the contexts use decoupled notifications to communicate.

The goal of this iOS prototype was to deepen our understanding of the synchronization. The first iteration of this implementation took a bit less than a week to develop without the conflict handling.

We are refining this early implementation (we plan to write a more technical blog post on the subject). Note that it still focuses a lot on the client side and that our server component is running on fast local network. One of the next moves will be to test this implementation under real network conditions including latency and errors.

The two of us are super excited to be working on this project that we had postponed for a while. We want to provide this service to our users as soon as we can; however, we are not in a hurry. Since we don’t have any pressure, we can take our time to get it right.

If you’ve read until here, we are also very interested in your feedback (Hacker News). In any case, rest assured that we will keep you updated on our progress.

According to the New York Times, teaching during the pandemic is a challenge that many teachers never faced. The newspaper presents Sarah Gross, a high schoo...

2020 was the tenth anniversary of Genius Scan’s creation. We had planned to throw a party, but the pandemic decided otherwise. Luckily, we’ve been able to fo...

How to Share Old Photo Albums With Your Family

The Holiday Season is a time of gathering. This year makes it difficult or unreasonable for families to reunite, so you might not have the opportunity to all...